The Architecture Book Fair is the first transnational virtual book fair dedicated to architecture, a project by dpr-barcelona as part of the activities of the Future Architecture platform programme for 2021. It aims to become an international reference in the field of publishing and divulgation of architecture and its intersection with politics, technology, economy and social issues. For its first year, the fair was curated by Chiara Dorbolò, an architect and researcher working between storytelling, criticism, and design and Future Architecture Fellow 2021.

The presented publications, related to the topic “Landscapes of Care”, explore the limits between printed matters and new media, transforming traditional publishing practice as we know it into a live exchange of knowledge. 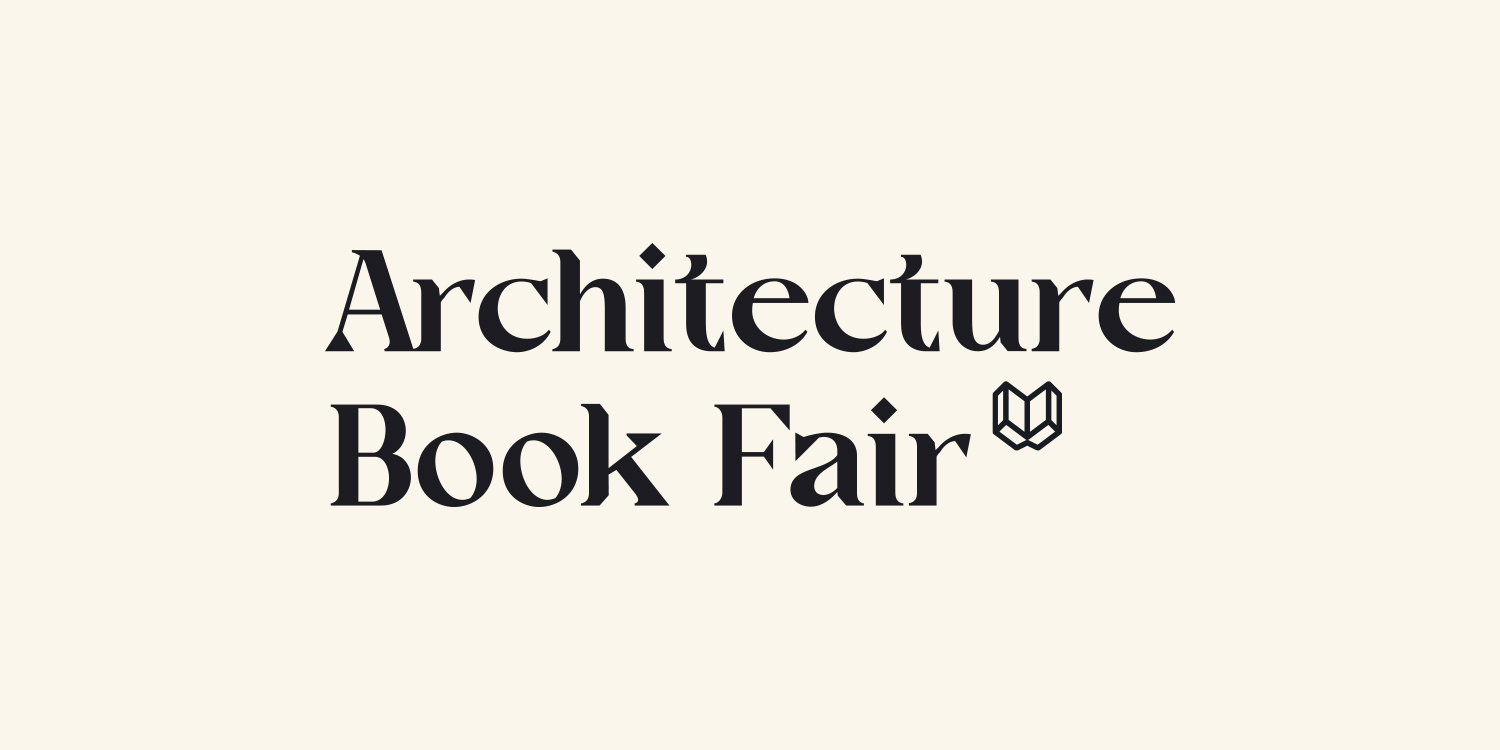 During the past years, dpr-barcelona as member of Future Architecture, produced several books under the umbrella of the platform, and developed the FA Library dedicated to host the editorial production of its members and emerging creatives, and work as an open repository. To further promote and enhance connections with external agents, we came across the idea of creating a virtual book fair, made possible within the pandemic context, as most events went online.

As the main differentiating feature from other fairs, the Architecture Book Fair consists of themed and curated editions. Therefore, during the Future Architecture Creative Exchange, we selected among the 2021 Fellows the person who would be in charge of building a bibliographic discourse around “Landscapes of Care”, the collective theme of the platform for this year. 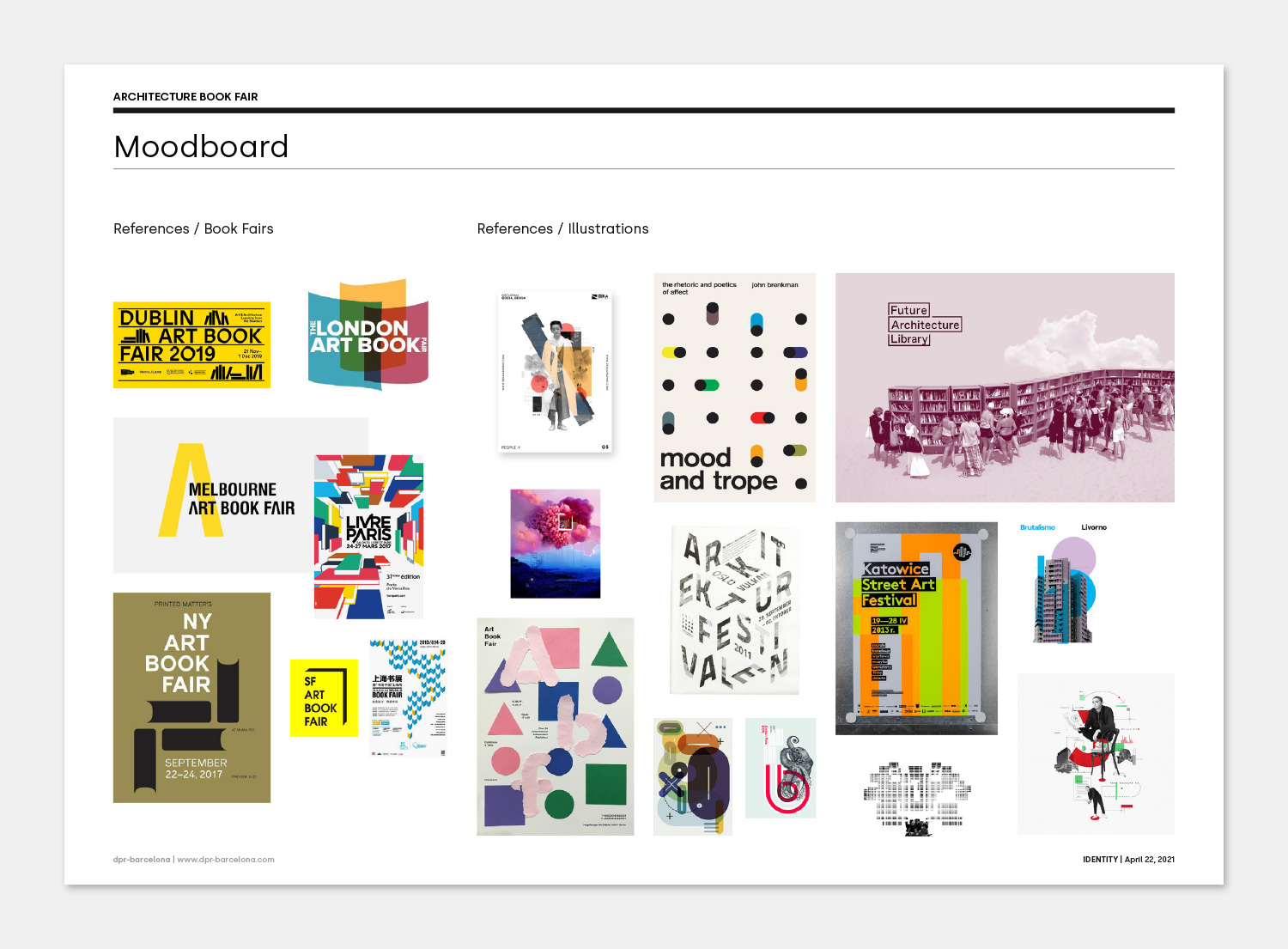 K.I.S.S.
keep it simple and straightforward

We wanted the name to be descriptive and straight forward, reusable and easy to remember for everyone. And unlike other art and architecture fairs, we wanted to focus the fair on architecture and its intersection with politics, technology, economy and social issues. After brainstorming with my partners, we agreed that it shouldn’t be an acronym but more a label, and the name “Architecture Book Fair” came naturally.

Once established the name, the graphic part of the project started with an investigation on how specialized book fairs look like and how can we be different, yet recognizable. As a general observation: recurring fair edition will have their own graphic identity, each year, mostly using display sans serif fonts. All those findings, as well as visual references, are summed up in a moodboard as starting point. 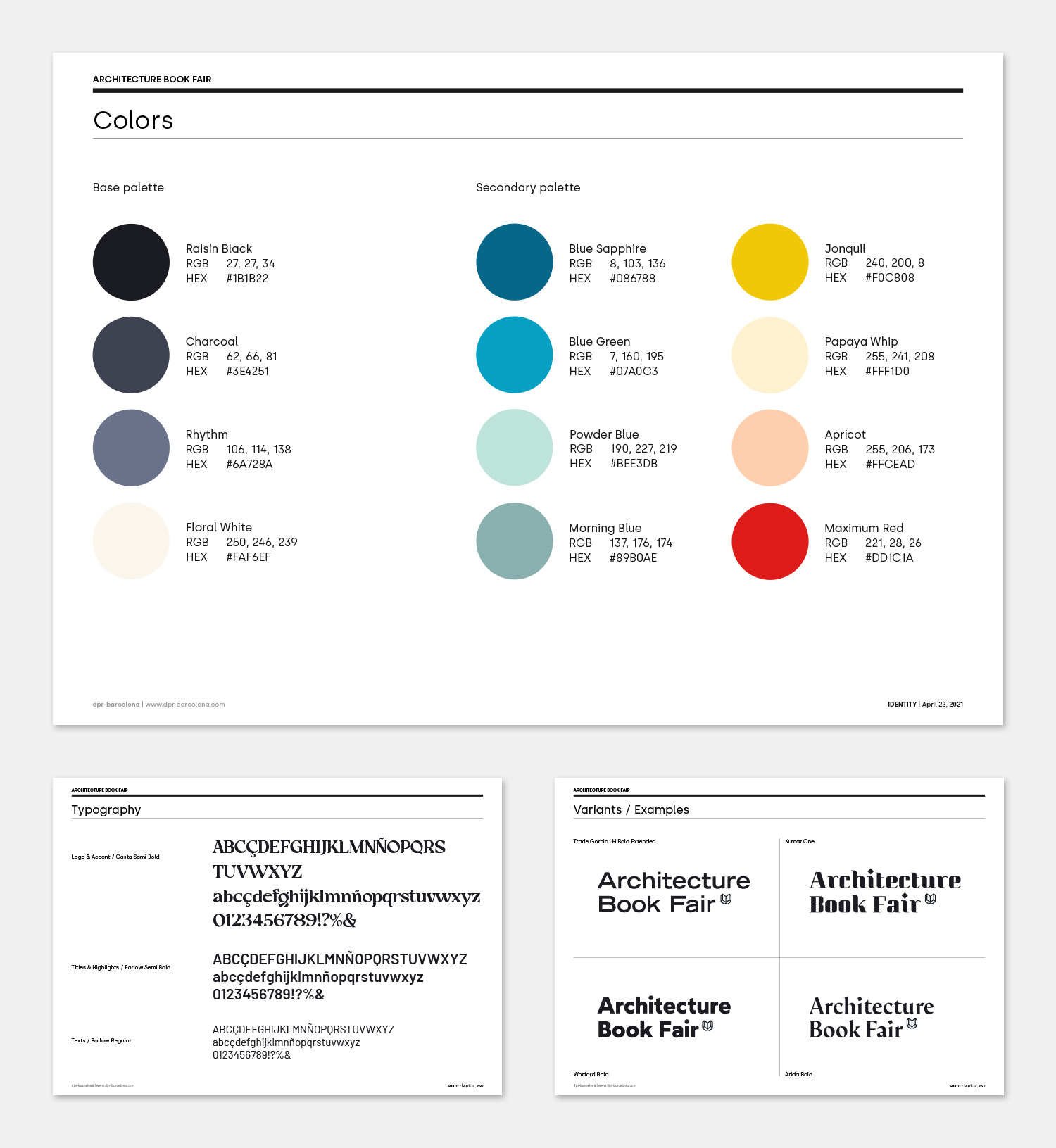 The no-identity
as an identity.

In 1961, Theodor W. Adorno, German philosopher, sociologist, psychologist, musicologist, and composer known for his critical theory of society, called for what he termed a “musique informelle”, which would possess the ability “really and truly to be what it is, without the ideological pretense of being something else. Or rather, to admit frankly the fact of non-identity and to follow through its logic to the end.” Adorno’s “negative dialectics” was an attempt to articulate a non-dominating thought that would recognize its limitations and accept the non-identity and reality of that which could not be subsumed under the subject’s concepts. (Source: Wikipedia)

Translated to graphic design, the no-identity would use the brand to identify and give consistency, but not as a claim, nor as the protagonist of the graphic language of communication. It works as a signature, which accompanies the graphic identity of each edition without hindering the uniqueness of the contents. Likewise, it differs from preconceived ideas about the subject and combines graphic resources and elements both fixed and changing.

The logo of the fair is composed by its name: “Architecture Book Fair”, always in two lines in a display typeface, accompanied by the same outlined pictogram of an open book, located as an asterisk.

To have a counterpoint to the typical kind of font used in book fair, as described previously, I looked into a display serif font that would catch the eye and give the fair a strong visual identity. So is Casta, a fresh and modern serif with a strong style. Its contrasts make this typeface both impressive at display sizes and easily readable in text size, while the sharp shapes of the triangular serifs and the distinctive letter shapes would work for both the logo design and highlight titles. It is designed by Aulia Rahman and Hendra Maulia, and published by Dirtyline Studio, a typefoundry based Indonesia.

Casta Semibold is the font chosen for the 2021 edition of the fair, along with the Barlow font, in Semi Bold and Regular for subtitles and contents.

The colour palette combines a base that range from warm black to warm white, with a secondary set of cold colours and another of warm colours, bright or smooth, that can be combined across them or used as stand-alone colours. 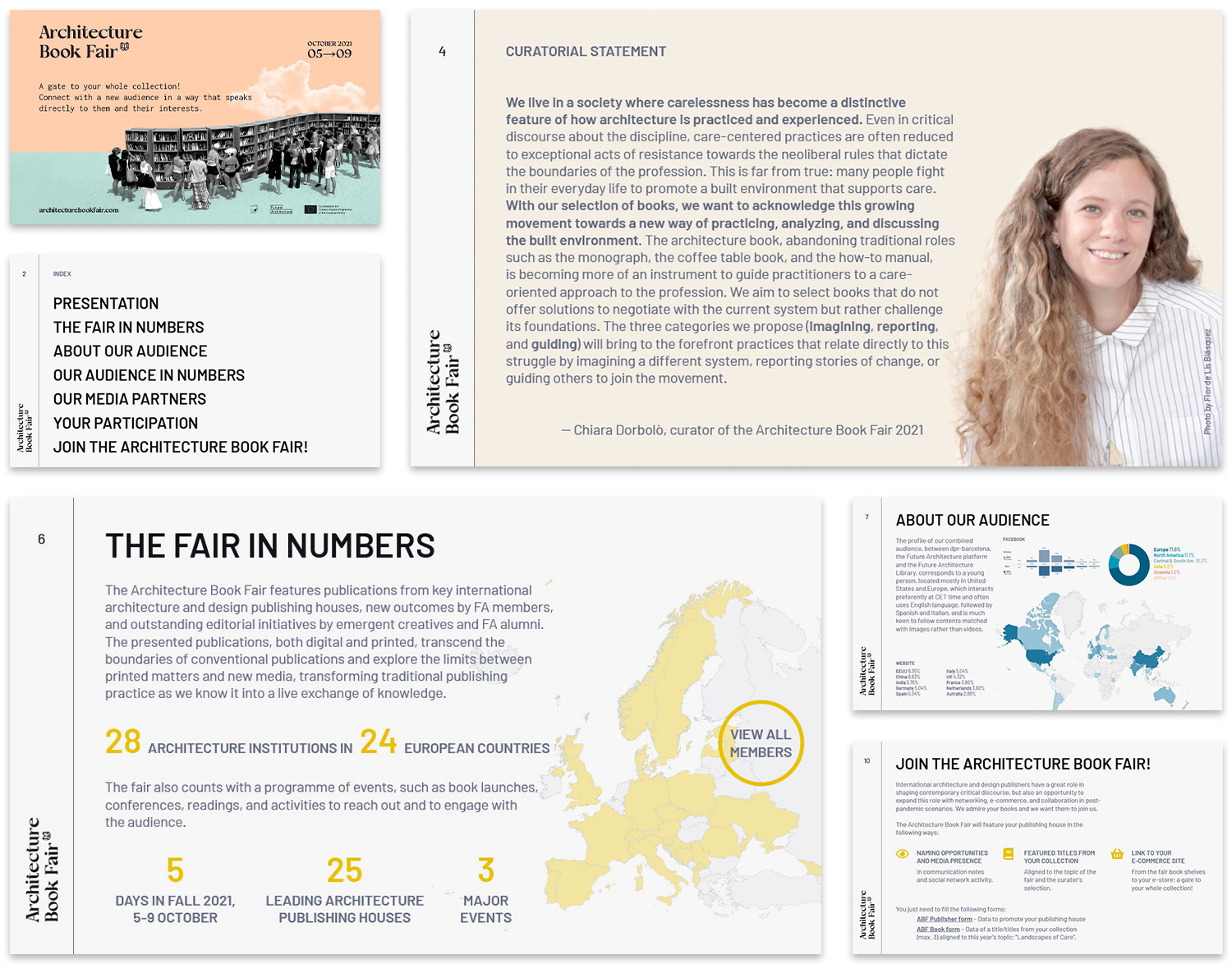 The visual identity was applied to all aspects of the project, from the cover letter and the pitch deck to present and invite the publishers to participate at the fair, to social network icons, headers and templates, or video covers for the events. 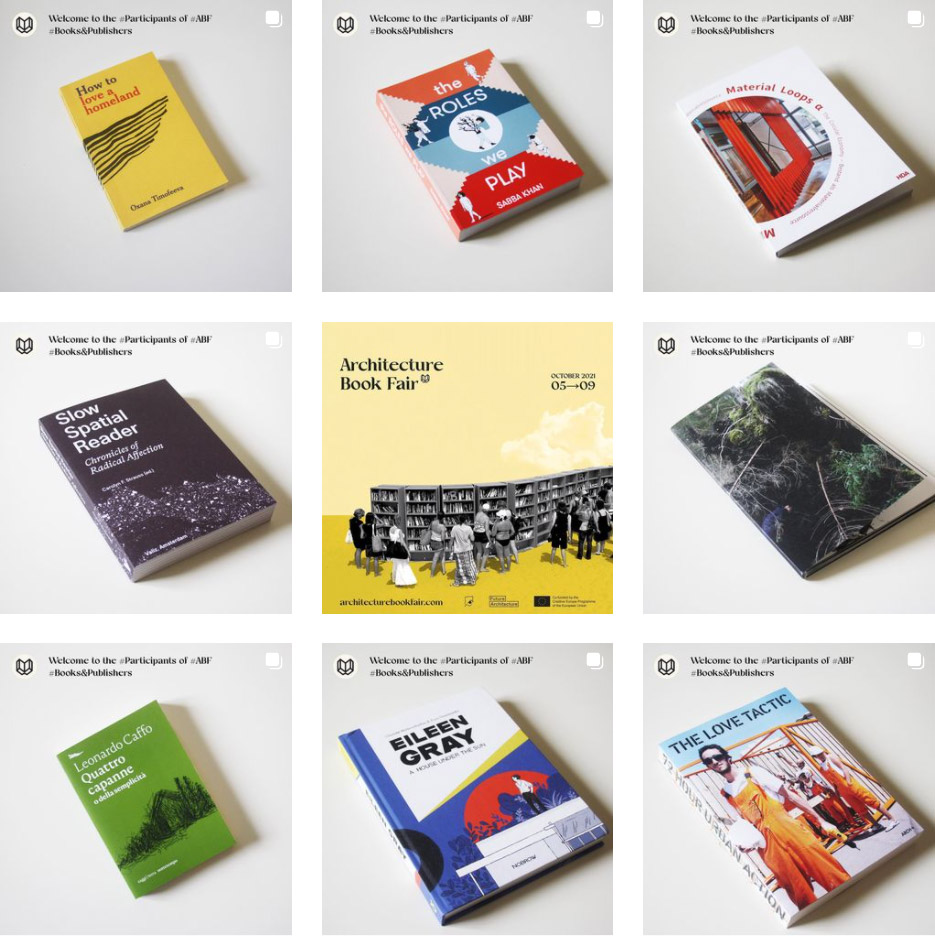 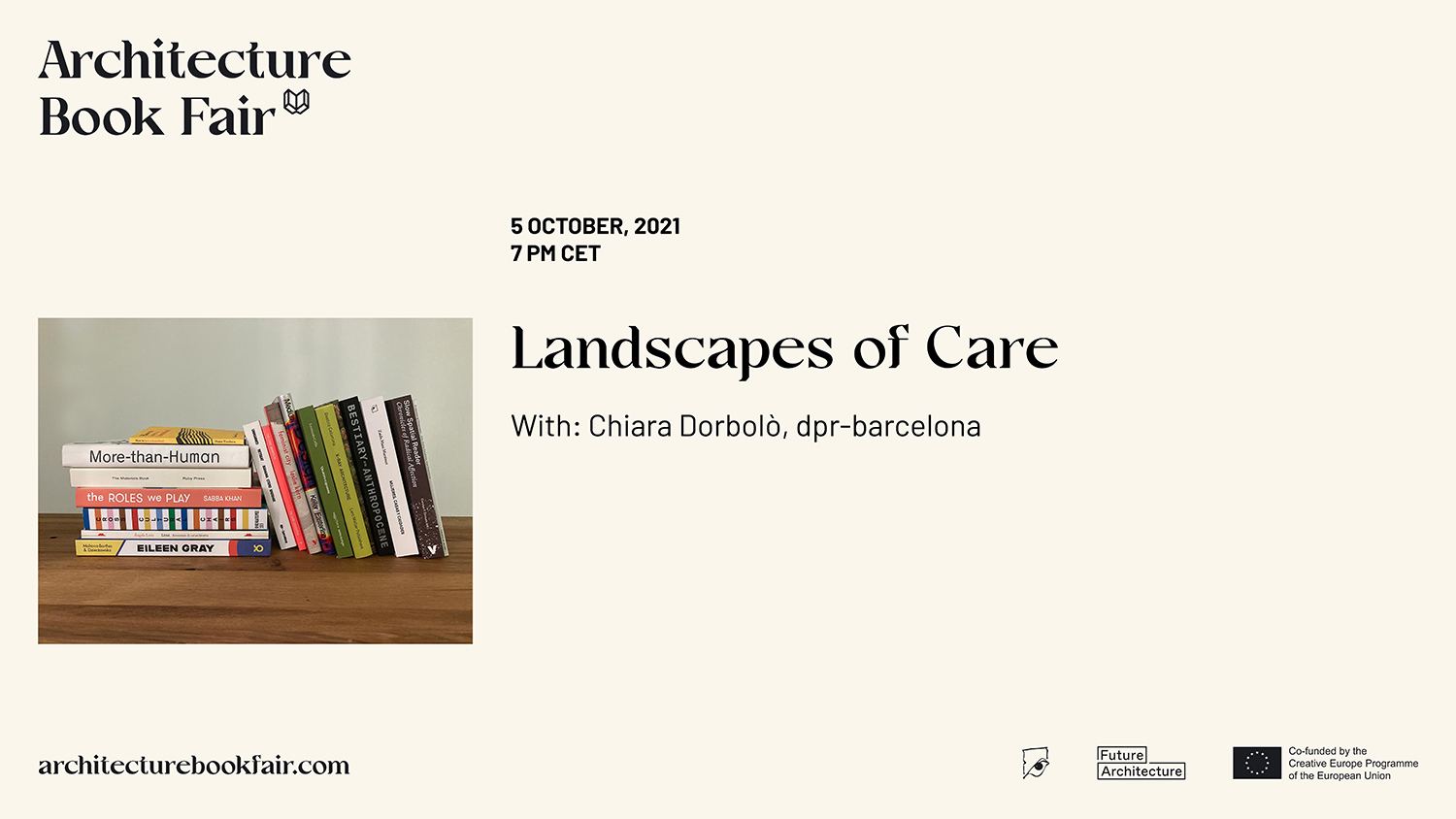 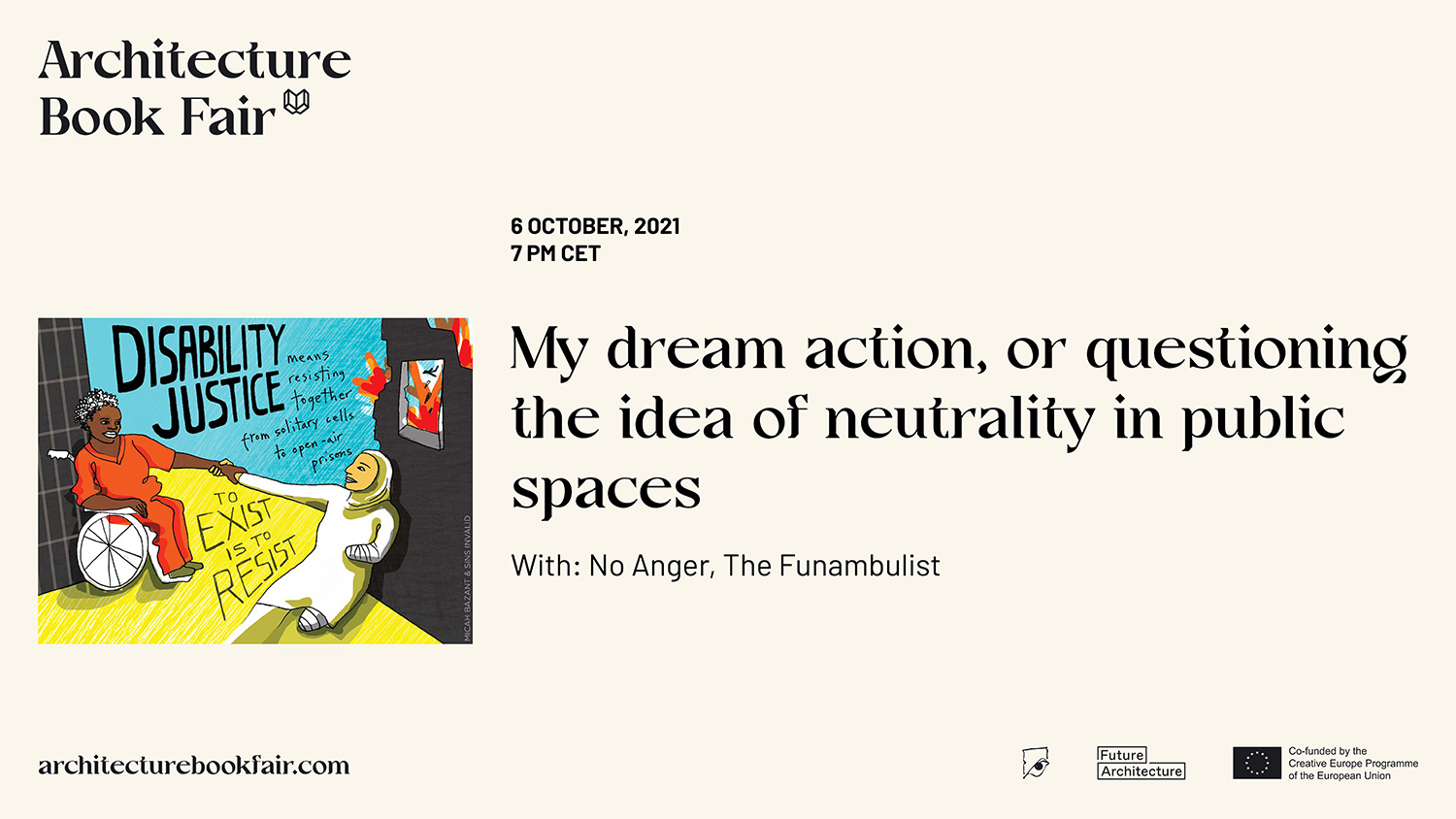 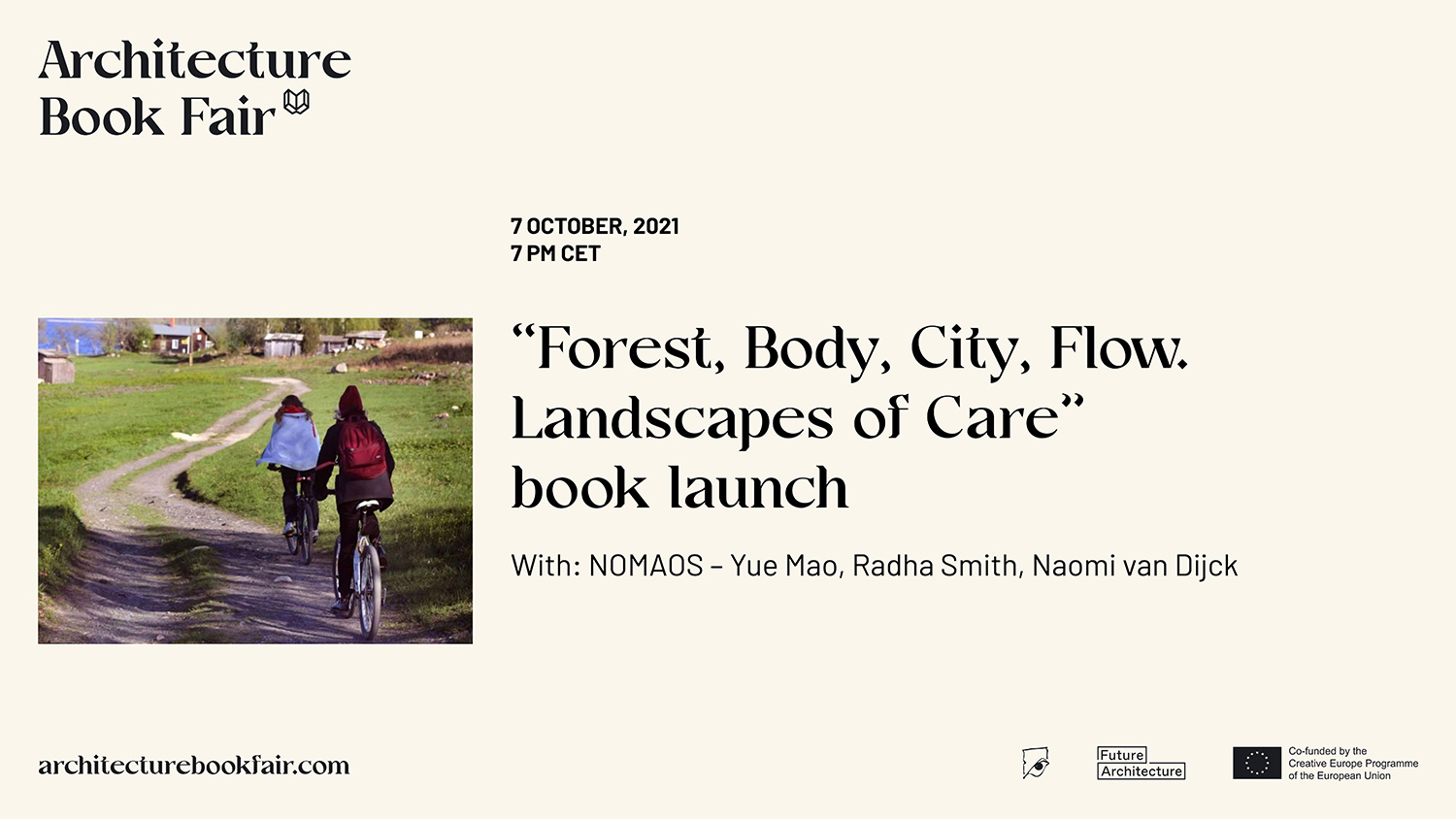 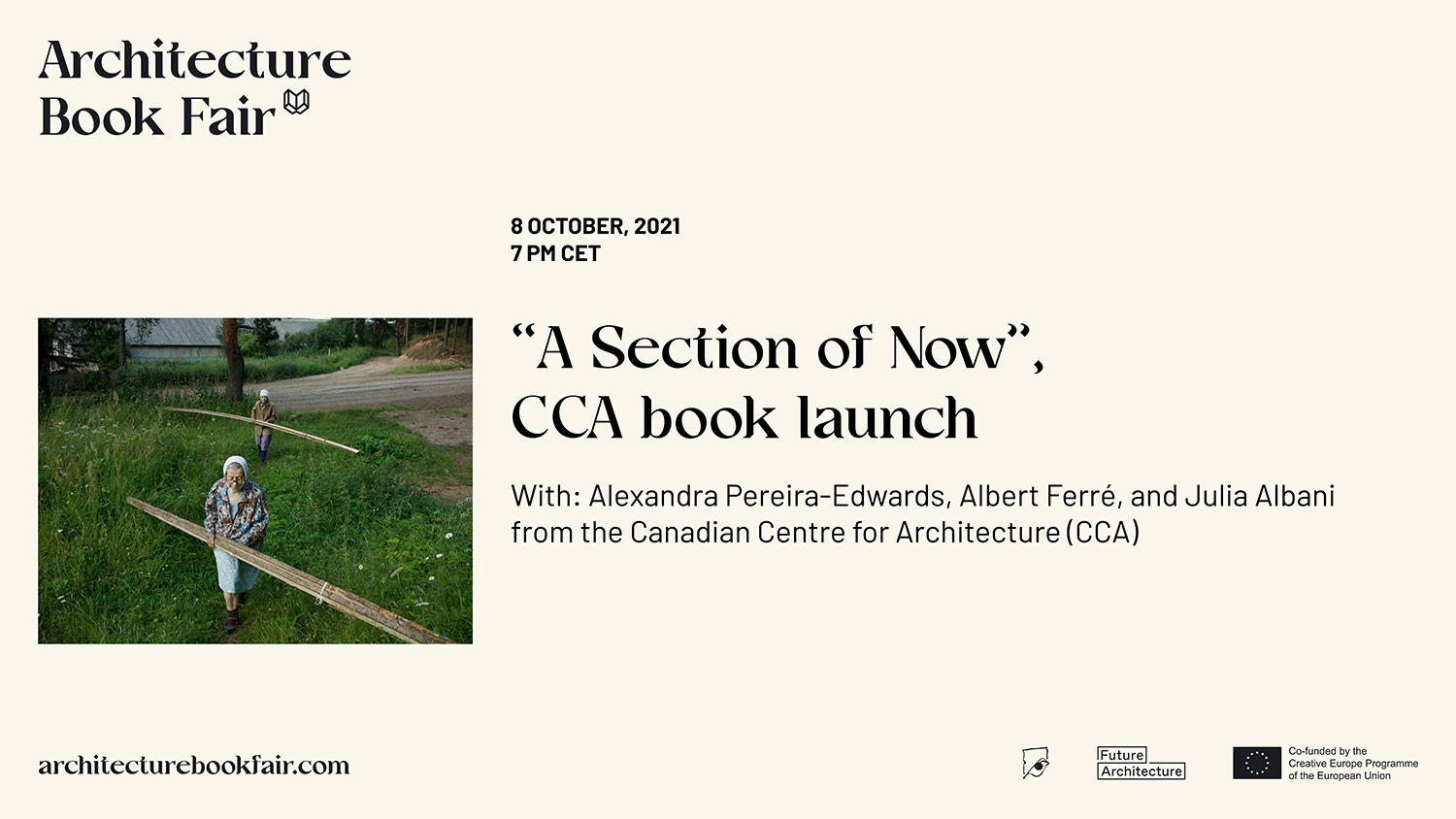 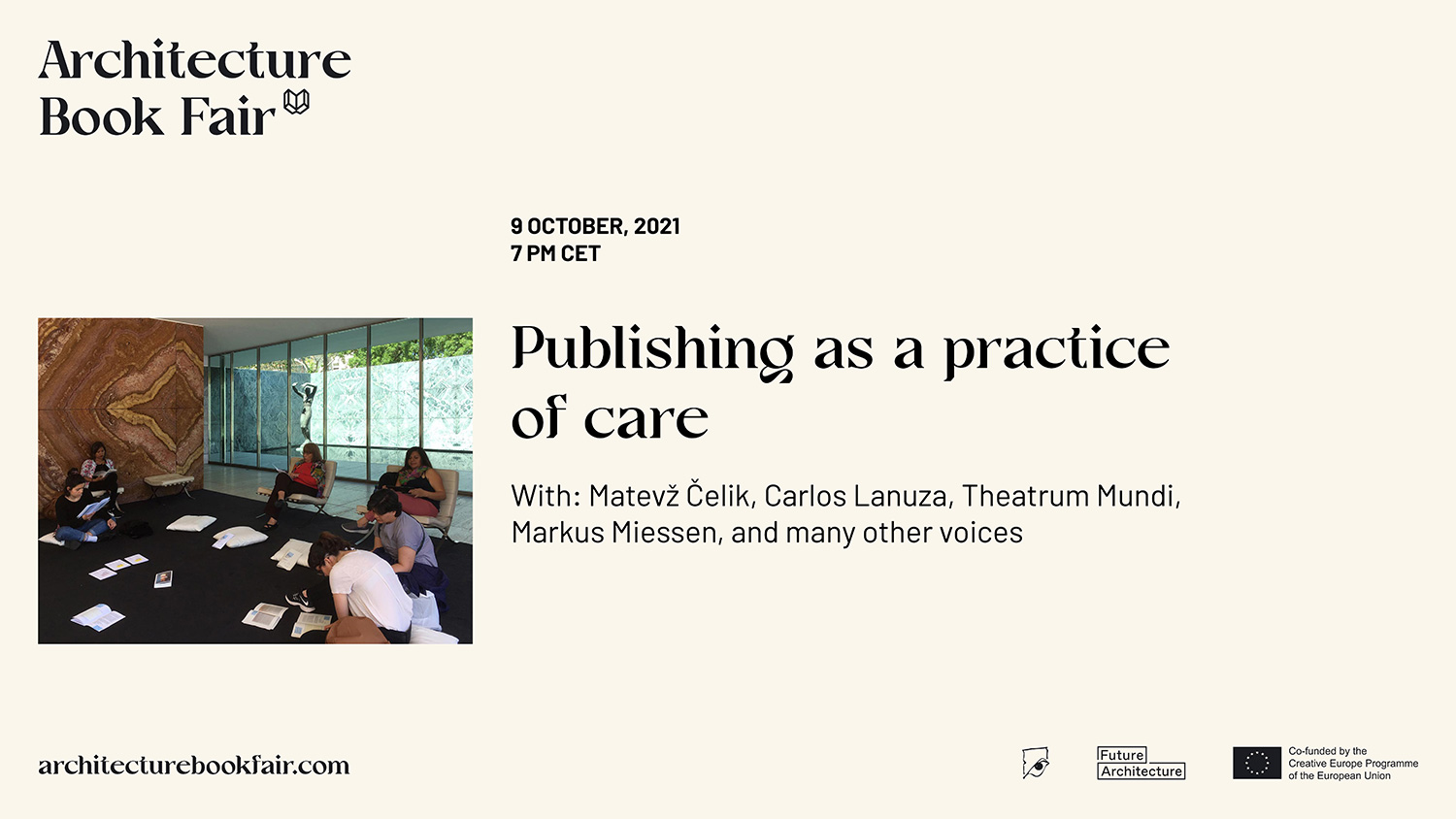 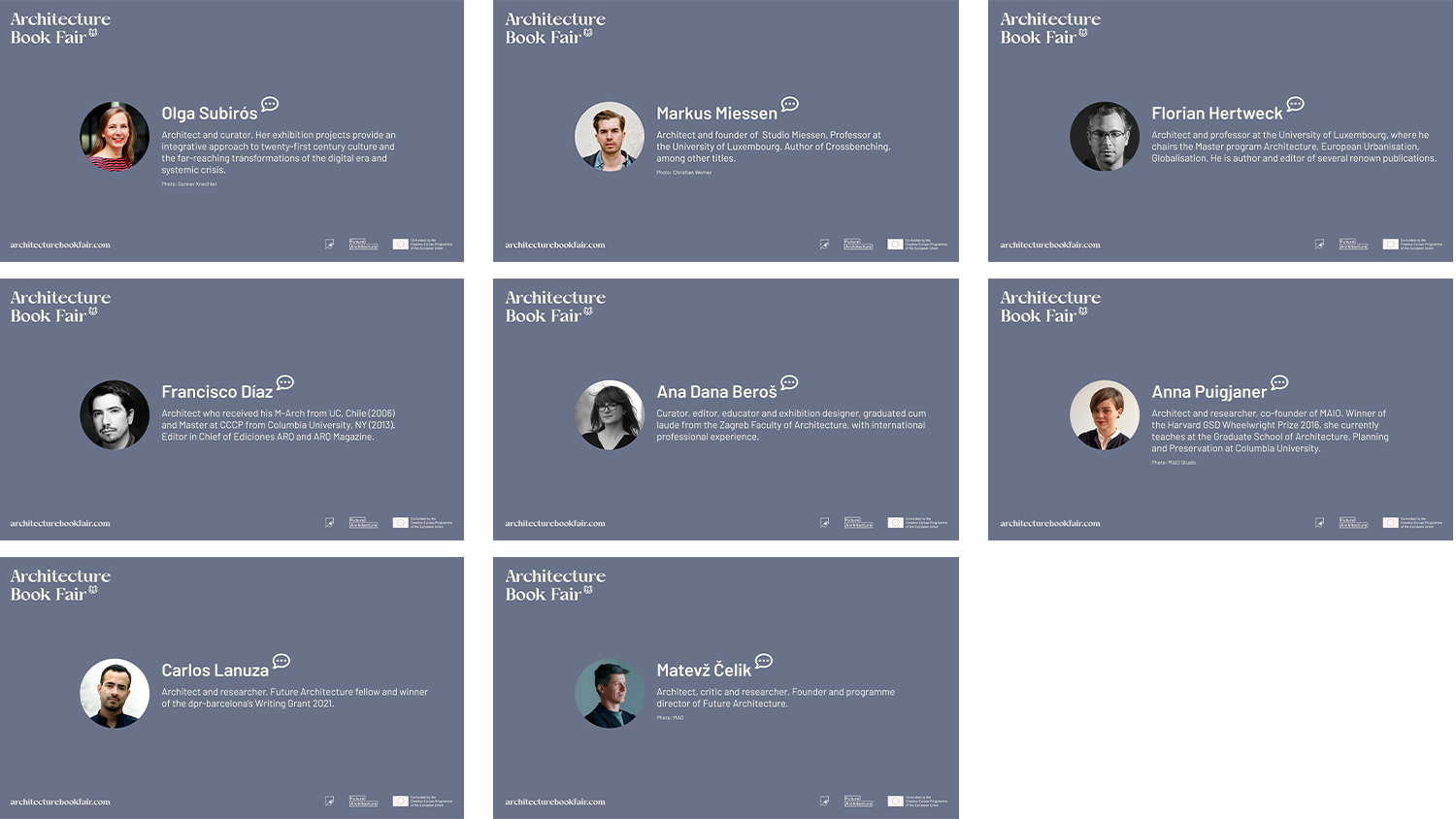 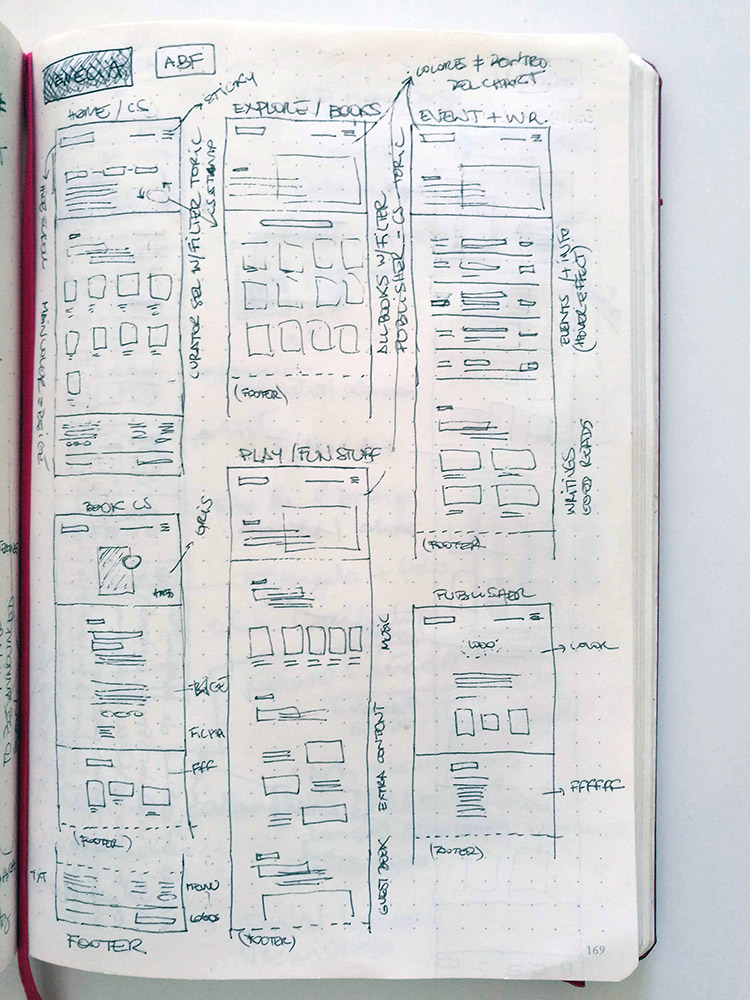 Considering that the main interest of the fair is to be curated, it was clear that the Curator’s Selection should have a prominent location: the homepage, with direct links to the Curatorial Statement and the biography of our curator. Also, the spinning stamp of “Curator’s Selection” is a constant across the website to highlight which contents belong to the selection and have a written review by the curator.

On the other hand, we wanted to acknowledge the participation of the Publishers by dedicating to each one a personal space to present themselves, their relationship with the fair and link their online shop and social profiles. It allowed them to interact with the fair and its contents in their own profiles, to both promote their books and the fair. The Architecture Book Fair also counted with a programme of online Activities, such as book launches, conferences, and readings, to reach out and to engage with the audience. 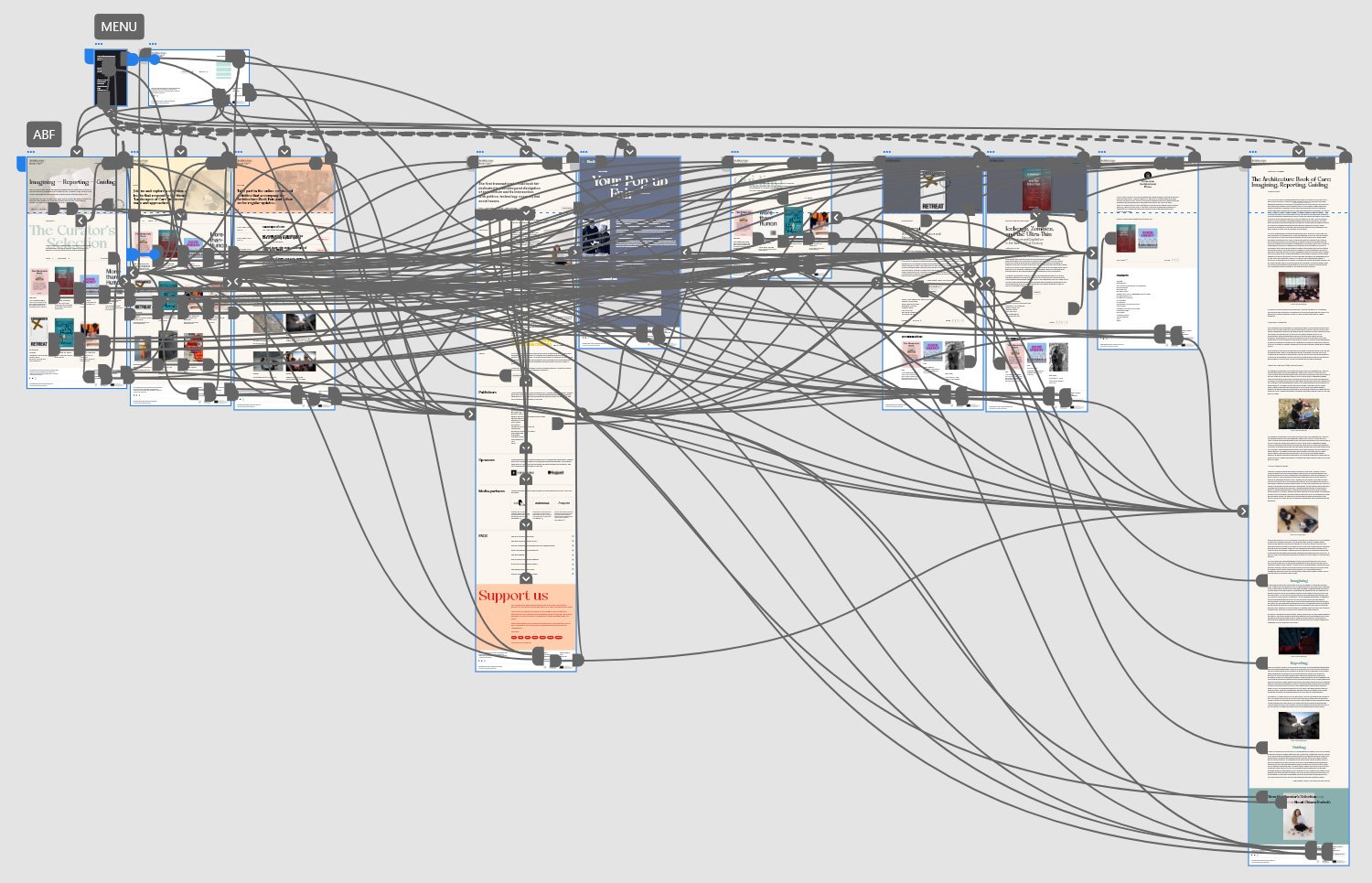 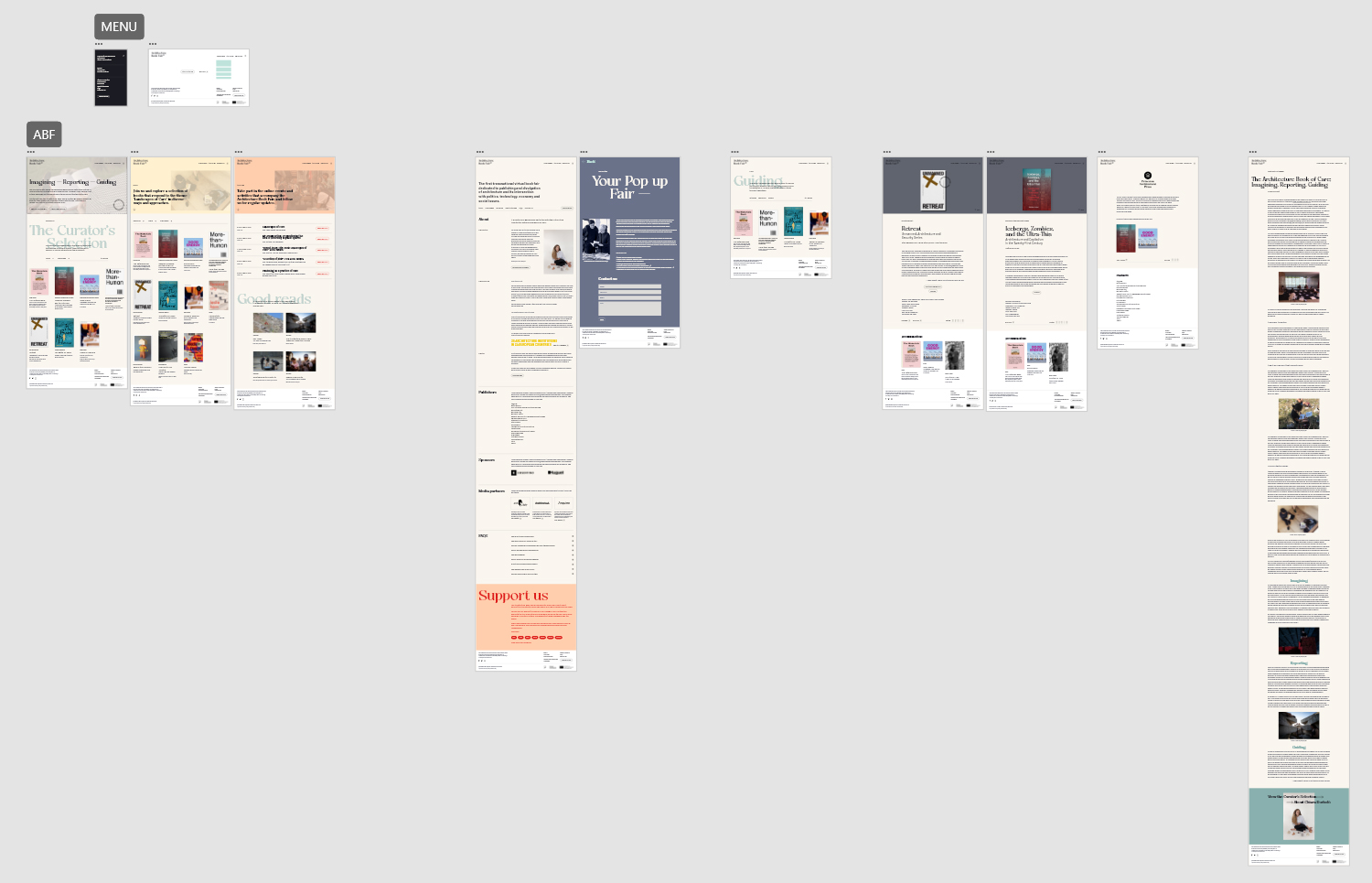 As part of the communication and promotion strategy, prior the months of the launch of the fair, we engaged with our audience by sharing exclusive contents such as music playlists made specially by invited guests, related reading and videos. All of them, summed up in the Procrastination section of the site.

To facilitate content management, I created two Google forms, synchronized with my Drive. One for Publishers, where they will enter their data and another for Books, with very detailed specifications of content and files. It allowed us to carry out a continuous follow-up with the publishers and to dump the information without further editing than formatting the covers of the books. 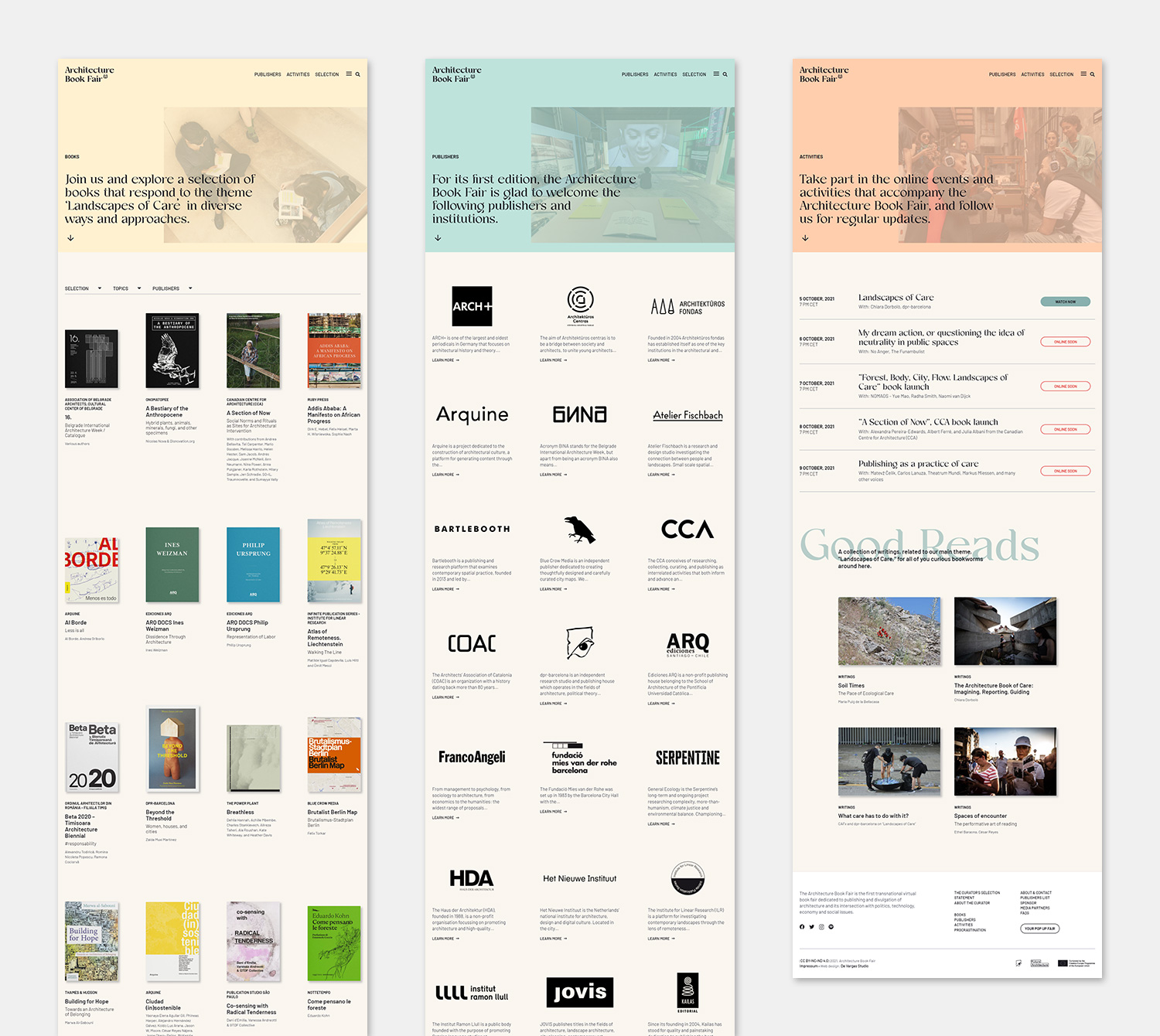 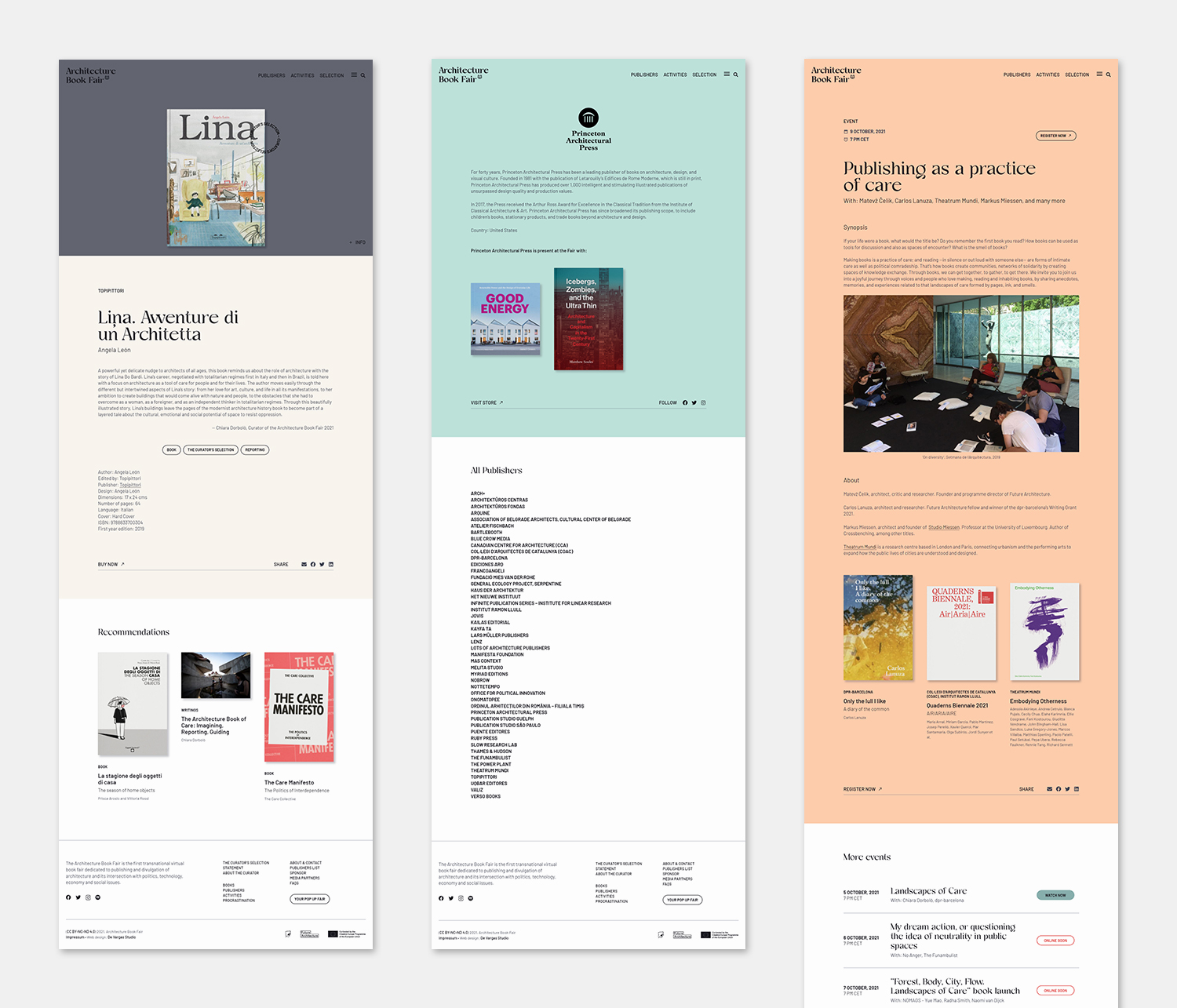 From the moment we begin to invite publishing houses and started to promote the Architecture Book Fair on social networks, it gathered great interest from our regular followers and cultural agents.

In fact, for a first edition, the result exceeded our expectations in terms of books presented and participating publishers, as well as the reception from the public:

The Architecture Book Fair is not only meant to become an international reference, year after year, it is also conceived to offer cultural institutions related to architecture, the space to host their own book fair.

And all the aspects are carried out by dpr-barcelona, from selection of topic and curator, design and development of the platform, coordination, communication, and events.