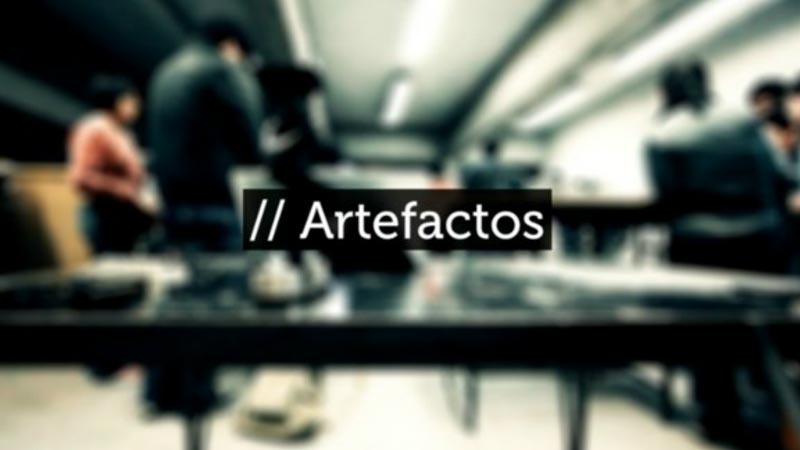 ARTEFACTOS is a book/shortfilm that presents the work of 16 contemporary mexican artists. All of their projects cover generative graphics (with Processing) controlled by external artifacts (built with Arduino) and sometimes real.time sound synthesis (with SuperCollider).
All projects are built in the «Generative Art» workshop, under coordination of Juan Manuel de J. Escalante (Realität) and Cecilia Sánchez Nava at the UNAM, National Autonomous University of Mexico, with the support of the FONCA, National Culture & Arts Fund.

If you are not pretty sure about what are «Processing», «Arduino» or «SuperCollider», keep on reading!

__
Processing is an open source programming language and environment for people who want to create images, animations, and interactions. Initially developed to serve as a software sketchbook and to teach fundamentals of computer programming within a visual context, Processing also has evolved into a tool for generating finished professional work. Today, there are tens of thousands of students, artists, designers, researchers, and hobbyists who use Processing for learning, prototyping, and production.
Visit www.processing.org

__
Arduino is an open-source single-board microcontroller, descendant of the open-source Wiring platform, designed to make the process of using electronics in multidisciplinary projects more accessible. The hardware consists of a simple open hardware design for the Arduino board with an Atmel AVR processor and on-board I/O support. The software consists of a standard programming language compiler and the boot loader that runs on the board. Arduino hardware is programmed using a Wiring-based language (syntax + libraries), similar to C++ with some simplifications and modifications, and a Processing-based IDE. The Arduino project received an honorary mention in the Digital Communities category at the 2006 Prix Ars Electronica. The name is an Italian masculine first name, meaning «strong friend»
Visit www.arduino.cc

__
SuperCollider is an environment and programming language originally released in 1996 by James McCartney for real-timeaudio synthesis and algorithmic composition. Since then it has been evolving into a system used and further developed by both scientists and artists working with sound. It is an efficient and expressive dynamic programming language which makes it an interesting framework for acoustic research, algorithmic music and interactive programming. Released under the terms of the GNU General Public License in 2002, SuperCollider is free software. The major release (3.4) was released in July 2010.
Visit www.supercollider.sourceforge.net